Helllooo! I'm completely new to this site and have no idea how it works. Nice to meet you! I was wondering where I could find any MUCC goods (shirts mainly) that can be bought in Australia, and sites that deliver to Australia, or anyone who is selling. :) Thank You!!

So since the community is pretty inactive, I wonder if anyone has listened to the new MUCC album, aptly named for the death of this community, haha? Thoughts? 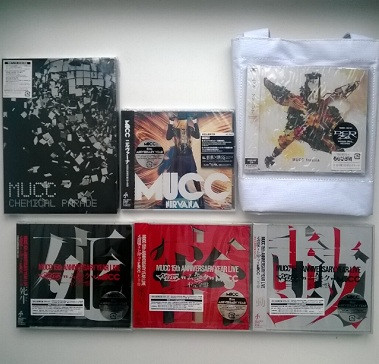 Shipping costs: depending on the country of destination.
Condition: like new
Shipping: From Russia to Worldwide
Payment: PayPal

Since this news is quite new I felt the need to share it here:

MUCC announced (click) that they will be touring for 7 months through Japan. (they also had this on youtube) It's called SIX NINE WARS and they will hold a total of 55 lives, seperated in different tours. (click for overview and click for translation of dates and places, etc.) They also briefly mention how they wanted to tour overseas, but are unable to do so, so instead they welcome us to come to their lives in Japan instead.
What they also announced is that they will be playing new songs of their new album (!) during the tour, so it's possible to hear the songs live before the album is even released! How cool is that!

Let me know what you think about all these announcements, are you able to go to one of the gigs? How do you feel about a new album?

As for me, I'm extremely excited, I might be able to go to the "Thanatos vs Thanatos" gig and the "The End of The World" gig! Tatsurou mentioned in the video that the new album will have a sound that's also new to MUCC. I actually thought they tried all kinds of styles already, so what will it be? All I can say is that I like it how they try all kinds of things, so I'm very interested to see what else they will create and do.

So yeah the community has been rather inactive, but for those who are still interested but aren't keeping up with Mucc here's what's been happening with them!

* In August, as part of their 15th anniversary celebration, they held a contest in which fans could apply to JOIN MUCC. Yes, you read it right, the fans would get to records, join in on photoshoots and interviews. Out of the 700+ entries, they chose Dean and Hancho as the lucky winners.


I actually really liked Dean. He reminded me of myself and how I would act if I was in his shoes, except for the fact that he didn't glomp Miya and hang on for dear life like I would. Also, the song they were singing sounded promising! A funny interview with all 6 can be found here http://www.en.barks.jp/news/?id=1000003132
Sadly, the two band members only lasted like 2 weeks. I wonder if they too couldn't stand MUCC's new sound *sad lol*

* In September They released a bland sounding single, "Halo" with an equally bland cover (or rather it is the most messed up one piece cover I've ever seen). I wish bands would find out how words are pronounced before proceeding to mispronounce them for the duration of the song....One of the bsides was a remix of 狂乱狂唱 21st century baby with only the children's choir during the chorus, much like the 暗闇に咲く花 but obviously not as good strictly due to the vast difference between the two songs.
Watch the single here as it's blocked on youtube (sorry video won't embed) To add insult to injury, Tatsurou's outfit is atrocious.
http://www.jpopsuki.tv/video/MUCC---HALO/b03f54cda5b9187cbf88e92ad6921c8e

* End of October, they will be releasing "World's end" (not 世界の終わり!!!)  which is going to be a theme for some anime full of people with glasses.... the cover also has a ship on it, are they trying to tell us something? Since the single isn't out till the end of the month and the short version of the youtube PV is blocked all I can say is that the snippet I heard from the preview for the anime also sounded bland and generic. le sigh

So to focus on the only fun thing out of all of this, if you got to join Mucc even for a day what would you do? I'd cut a lock of Tatsurou's hair and prick Miya with a pin so that I can clone him!

For more info please check it out here @

lordofshadowz. Feel free to check out my other items on sale.

I'm selling a few of my MUCC-CDs
I just have the european editions, but they are in perfect condition.

There are no prices set, so please: Make an offer! :D
Collapse